5 of the Largest Creatures Living in Our Oceans

An estimated 50-80% of all our planet’s life is found beneath the ocean surface, and the oceans actually contain 99% of all the living space on Earth – so it should come as no surprise that the world’s biggest lifeforms reside underwater.

Here at Bristol Aquarium, we’re constantly finding new ways to educate you on all things marine. Whilst we cannot house these ginormous underwater creatures here its fascinating to learn all about them none the less.

The giant Pacific octopus grows bigger and lives longer than any other octopus species. The average specimen is 16 feet across and weighs about 110 pounds, but the largest of its kind ever recorded measured at 30 feet and weighed in at more than 600 pounds.

These real-life Krakens are highly intelligent. They have learned to open jars, mimic other octopuses, and solve mazes in lab tests. As if that’s not impressive enough, they can even shapeshift and camouflage themselves to blend in against rocks and corals.

Even though they are not yet on any lists of endangered or vulnerable animals, they are highly threatened by environmental conditions and marine pollution due to their unique iron-based blue blood – which causes them to be extremely sensitive to changes in acidity – just like any other octopus species.

This is the one you can see here, so come and meet a giant Pacific octopus at Bristol Aquarium! 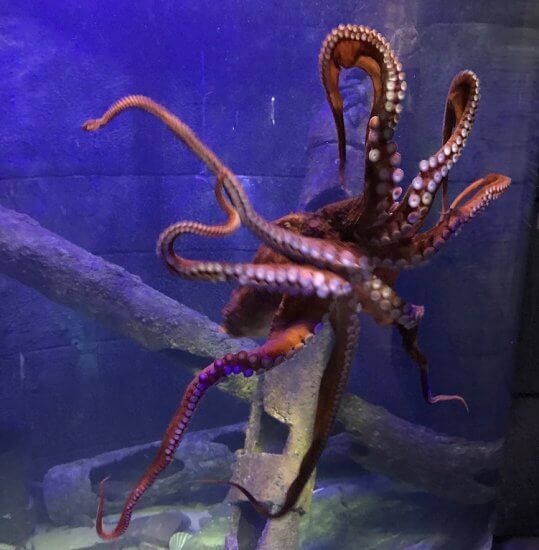 Also known as a mola mola, or a ‘swimming head’ for its distinct lack of a tail, this weirdly wonderful species is the heaviest of all bony fish. One has been measured at over 10 feet and 5,070 pounds.

Sunfish are skilled divers: they have been recorded to dive more than 2,600 feet below the surface. When they’re not deep-water diving, they can be spotted basking in the sun near the surface of the water, warming up their bodies.

Don’t be fooled by their clumsy and chilled appearance though! Sunfish are as voracious as they come. That’s right, sunfish travel miles each day in order to feed. They have a taste for jellyfish but will only eat the most nutrient-rich parts – the arms and the gonads (delish!) – and discard the rest. They are harmless to humans, but can be very curious and will often approach divers.

Unfortunately, sunfish are considered vulnerable because they frequently get snagged in drift gill nets. But one of the deadliest threats to the species is actually marine litter such as plastic bags, which are easily mistaken for jellyfish.

The lion’s mane jellyfish has hair-like tentacles that can grow up to 120 feet in length. It’s arguably the longest animal in the sea, discounting the saltwater bootlace worm, which some marine biologists argue could measure up to 180 feet from end to end when fully stretched.

These languid beauties can have up to 1,200 tentacles – bundled up in eight sets, each containing between 70 and 150 individual tentacles. Other than to store poison, it’s unclear why these jellies have such long tentacles, considering they’re known to get tangled in marine debris if not with other tentacles, they take time to contract, and they make the jellyfish considerably more appetising to predators with a taste for jellyfish arms *ahem, the ocean sunfish*.

The next sizeable sea creature is the largest known fish species, the whale shark. On average, the whale shark grows to between 18 and 33 feet long – which is about the size of a school bus – but it can grow up to 40 feet long.

Whale sharks are more whale than shark, in that they don’t feed like their relatives. Whale sharks are meat-eaters, but they don’t attack and tear their prey to shreds like you often see in popularised shark-attack movies. They’re filter feeders, which means they open their mouths, let water in, and then their bodies filter out the yummy treats and release the water and any debris back into the ocean. Their primary food sources include plankton, shrimp, squid, other small fish, fish eggs, and marine plants.

Tipping our scuba masks to the king of the sea: the blue whale is the largest animal ever known to have existed on planet Earth, dwarfing even the largest of dinosaurs.

The longest blue whale ever recorded was an astonishing 108 feet long – almost the size of a passenger plane! They have hearts that are as big as cars, and their heartbeats can be detected from two miles away. They have tongues that weigh as much as elephants (as in, full elephants) – which, just to illustrate the sheer size of the blue whales, are some of the largest land mammals… but we’re sure you get the picture.

By the 20th century, commercial whaling drove the species to near extinction, but thanks to the global whaling ban, their numbers are on the slow road to recovery. Having said that, much like many other marine life, they are still endangered and facing a number of serious threats, including, but not limited to, the impacts of climate change.

Our team of aquarists are dedicated to conservation of all life in our oceans and beyond – whether it’s animal husbandry or raising awareness for the prevention of marine litter, we aim to give back to and protect our environment as much as we can. To find more information on the conservation work we do, check out all our successful captive breeding stories.

But don’t stop there, you can do your part too! We offer a range of school and club visits for different ages, as well as daily talks and feeds, so you can dive in and learn more about how you too can contribute to the preservation of ecosystems in oceans and seas.