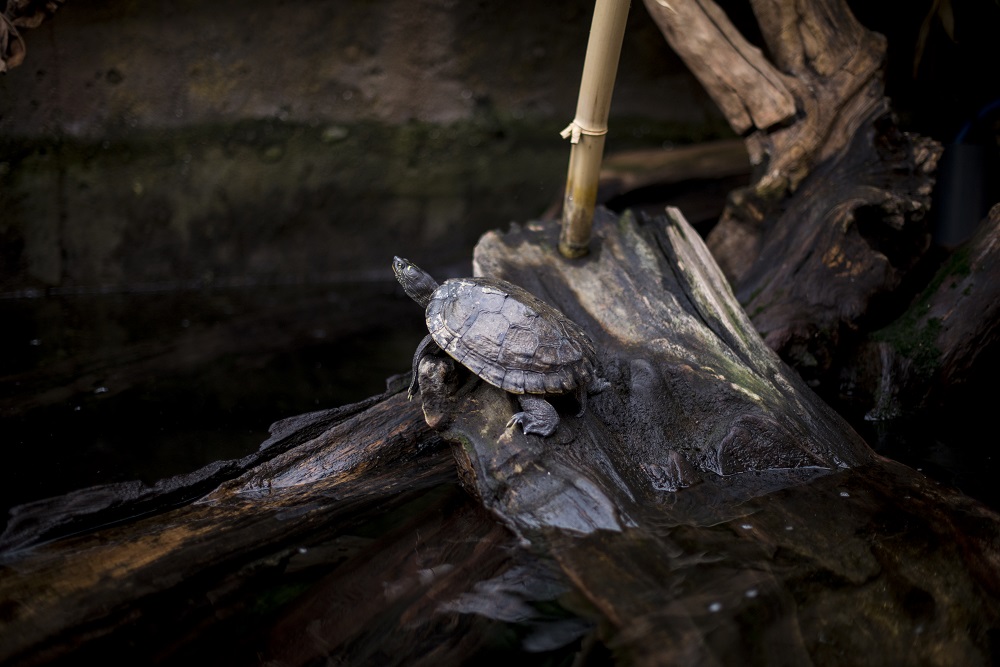 What is the difference between turtles, terrapins and tortoises?

These different names for very similar animals can be confusing so we have put together a helpful guide. Tortoise are land animals, though they do often love a bath and can swim well when required, they spend their time on dry land. Terrapins are amphibious, spending time both on water and on land. In the UK, the term turtle is used for marine animals that spend all of their time in water. There are differences in these definitions in the US, where the term turtle is used for both the marine turtles and the semi-aquatic terrapins.

The red-eared terrapin, also known as the red-eared slider, get their name from the distinctive red mark around their ear. The “slider” part of their name comes from their ability to slide off rocks and logs into the water quickly. They can live for over 30 years in the wild, often reaching ages of 50-70 years old in captivity. Females tend to be slightly larger than males, whereas the males have longer tails and claws.

Turtles, terrapins and tortoises have a protective shell which is made out of a substance called keratin, which is the same thing that our hair and nails are made from. These shells are actually part of the animal’s body, and are fused to the spine and ribs of the animal. So unlike what we may see in cartoons, turtles and tortoises cannot come out of their shell, as it is a part of their body. This is why proper handling is essential so as not to cause harm. The shell is made up on smaller sections called scutes, which grow and harden with the animal to provide a protective layer from predators.

Terrapins do not hibernate but have periods of less activity in the colder months. Here in the aquarium our botanic house is kept at a constant warm temperature all year round, and with plenty of food available the terrapins can be active no matter the weather! Terrapins have a varied diet including insects, crustaceans and fish as well as plants and fruits.

Red-eared sliders do not make good pets, due to the expense of the set up and maintenance, the large space they require and the mess they produce! After the Ninja Turtle craze, thousands of unwanted pet sliders were released into the wild in the UK once they outgrew their tanks, causing huge problems for native wildlife.