A new female has joined Bristol Aquarium’s male Atlantic Wolffish (Anarhichas lupus) which is arguably one of the ugliest fish homed at the city centre attraction.

The wolffish live deep in the Atlantic ocean, distinguished by their unique set of protruding teeth, which they use to crush the shells of their prey. 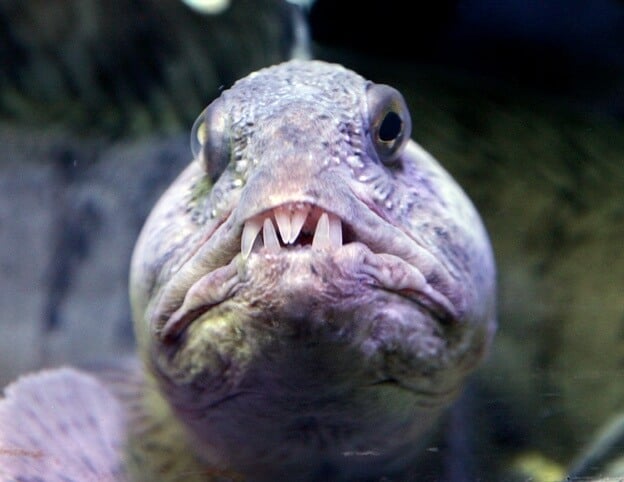 Tamara, Aquarist at Bristol Aquarium said: “We have been monitoring the two of them very closely since the female’s arrival and we are very pleased they are settling so well together.

“The male wolfish is named Lupo and we have now named the new addition she-wolf!” Tamara added.

Wolffish live in extremely cold conditions in the deep depths of the ocean, they have therefore developed their own natural antifreeze system, which they produce to keep their blood fluid. They are found in rocky caves and retain their energy by moving as little as possible.

They are often mistaken for eels because their bodies are shaped in a similar way, they also move from side to side like an eel would – however they are actually a fish.

Atlantic wolffish inhabit both the west and east coasts of the Atlantic but are housed in Aquariums to raise awareness of this interesting species, because they are listed as Endangered on the IUCN Red List.

Bristol Aquarium is home to a host of underwater creatures from cold water to tropical species from all around the globe. With 40 different naturally themed displays home to over 4000 animals, including two pretty ugly wolfish!