This year’s event will be the 10th annual international celebration of the amazing octopus as well as other members of the cephalopod family.

The star of the show will be the Harbourside aquarium’s newly-arrived common octopus.

As its name suggests the common, or Mediterranean, octopus is normally found in warmer southern waters, although individuals do occasionally appear around the west coast in the summer months.

It’s thought their numbers are on the increase, possibly due to the effects of gradually rising sea temperatures.

Octopus have a highly evolved nervous system. They’re eyes are more developed than humans and they have the largest and most advanced brains of any invertebrate.

Despite the fact they belong to the same family as slugs and snails, octopus can perform highly complex tasks.

As well as unscrewing jars, they can open boxes, distinguish between different shapes and colours and complete mazes.

According to Israeli scientists some of the octopus’s intelligence is actually contained within its tentacles. Each of the octopus’ eight arms is controlled by an elaborate nervous system consisting of 50 million neurons. 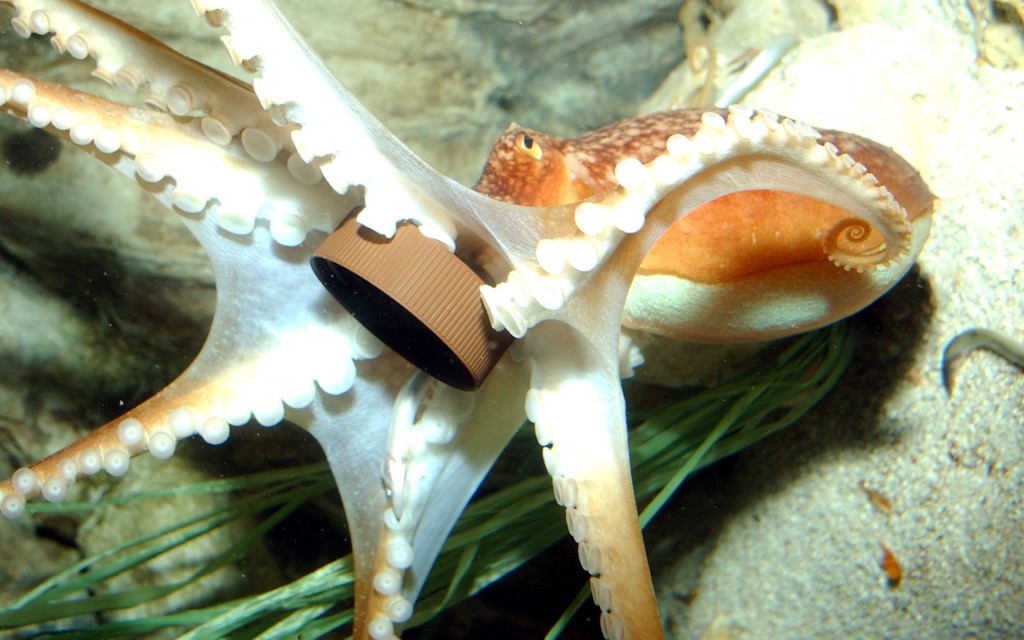 An Octopus with a jar lid!

Bristol Aquarium’s David Waines said: “Octopus and the other cephalopods are such amazing creatures that it is only right there should be a day set aside each year to celebrate them.

“They are represented in the fossil record dating back 500 million years. There are about 800 species of living cephalopods known to science, with the possibility of many more as yet to be discovered,” he added.

Cephalopods range in size from the tiny 5cm long Sepiola to the monstrous Architeuthis dux, or giant squid, which can reach 18 metres in length and has the largest eye in the animal kingdom –the size of a small car tyre!