Famous for having eight arms and a large bulbous head – the octopus has made an underwater name for itself as one of the most intelligent aquatic creatures to swim in our oceans. Having eight arms is enough to set it apart from the other fishes in the sea, but, here are ten even more fascinating facts about this intriguing creature… 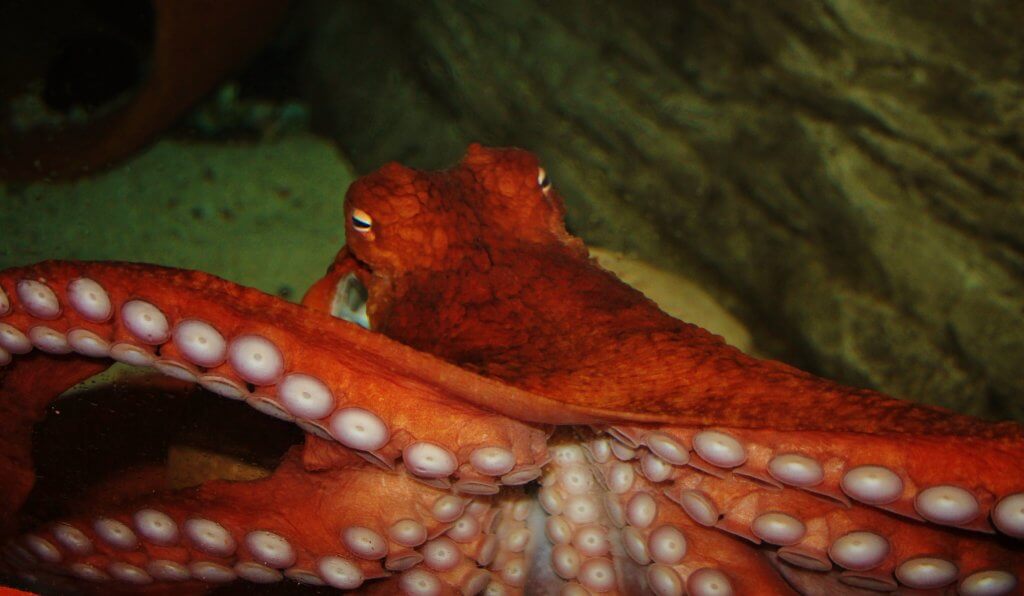 It may look friendly as it waves to you eight times, however, the octopus can pack a very hefty punch – a poisonous one at that. The octopus is able to create venom from the bacteria that lives inside its body and uses it to deter predators.

There’s nothing to worry about, though. The majority of octopuses aren’t full of enough poison to harm humans – apart from the blue-ringed octopus, which can paralyse an adult human in minutes.

Inside an octopus’s ink is a compound called tyrosinase which can cause a blinding irritation. This is used as a defensive mechanism when an octopus feels threatened by a predator. It gives the octopus the chance to get away whilst the predator is trying to overcome the potent ink spray. The spray can be so strong, that even an octopus can die if it doesn’t escape its own ink cloud in time.

Octopi? Octopodes? Octo-squad? Does anyone know the plural version for octopus? Oh, wait, we do! It’s octopuses. Deriving from the Greek word of ‘oktopodi’, it directly translates to ‘eight-foot’ – makes sense actually.

There’s a whole lot of loving in the octopus world, as an octopus has three hearts – that’s right, three! Two out of the three work hard to move blood through its gills (branchial heart), whilst the other one is responsible for pumping blood through its entire body (a systemic heart).

The creature’s intelligence may have something to do with the fact they have nine brains. Its nervous system is made up of one central brain and a brain at the base of each arm – which is why an octopus can be doing something different with each arm at the same time.

Clever, clever creatures. Well, Aristotle didn’t think so! The famous philosopher once wrote that “the octopus is a stupid creature, for it will approach a man’s hand if it be lowered in the water”. If only Aristotle was around now to see an octopus unscrew a jar with one of its nine brains…

The octopus has waaaaay outlived dinosaurs and date back a whopping 296 million years. These underwater creatures were existent during the Carboniferous period.

Scientists found fossil remains which depict the aquatic creature to have eight arms, an ink sack, and two eyes – sound familiar? So, next time you’re worried about another birthday coming around, think about how an octopus feels…

Not only are octopuses cold-blooded, but they also have blue blood. In order to survive in the deep depths of the oceans, octopuses have evolved to have a copper-based bloodstream known as hemocyanin, instead of the more commonly known iron-based bloodstream.

The copper base allows an octopus to easily transport oxygen throughout its body, which is needed to ensure those three hearts and nine brains receive enough oxygen to carry on functioning.

One of the most distinctive characteristics of an octopus is that after mating and giving birth, both the male and female die. After the male octopus has given the female its hectocotylus (mating arm), it soon swims away and dies. Researchers are still unsure as to why, but, some believe if this didn’t happen, octopuses would soon take over the oceans due to their rapid growth and reproduction cycle.

The female octopus can lay up to 400,000 eggs and due to its obsessive and aggressive nature when tending to its eggs, it prioritises its motherhood duties and therefore stops eating. When the eggs hatch, the female’s body undertakes what is called a ‘cascade of cellular suicide’. The female puts so much energy into tending for her offspring that she does not tend to herself and therefore dies.

Just call them the chameleons of the sea. Sorry Culture Club, but, the octopus camouflage game is way better than yours…

Under an octopus’s skin is an element called chromatophores which is a mix of pigment, nerves, and muscles. An octopus is able to manipulate these in order to change its external appearance. Octopuses camouflage themselves to hide, send a warning message, or attract a mate – it can take them up to several minutes to fully change colour.

It’s not just changing colour, either. An octopus can actually mimic other creatures such as sea snakes, lionfish, and flatfish. Impressive, right? Well, how about being able to squeeze in and out of the tiniest of places? Because they have no bones, an octopus can practically squeeze into any space. Good luck trying to find one in a game of hide-and-ink… we mean hide-and-seek.

There are over 300 different species of octopus roaming our oceans – one of which only has seven arms! Here’s the quick need-to-know on the main ones…

Despite pre-dating dinosaurs, the lifespan of an octopus is actually very short. Its maximum lifespan is five years and some octopuses live for only six months – once an octopus reaches mating maturity, it actually symbolises the end of its life.

If these cool facts are octopi-ing your mind, make sure you swim on over to see our giant Pacific octopus at one of our Octopus Weekends! With a full schedule of interesting talks and activities, you’re guaranteed an INK-credible time.

Get your tickets here and save 10% when you buy online.