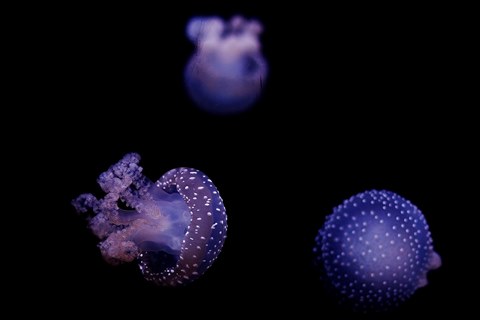 An exotic new species of jellyfish has gone on display for the first time at Bristol Aquarium.

The white spotted, or floating bell, jellyfish is native to the West Pacific from Australia to Japan and can grow up to half-a-metre in diameter.

The jellyfish gets its name from the numerous white spots that cover its bell.

Bristol Aquarium’s Liv Orchart said: “Jellyfish are very much in the news at the moment with all the recent sightings of barrel jellyfish around the coast – our jellies are significantly smaller, but also a lot prettier!

“Ours arrived as juveniles from The Deep in Hull but they are growing fast and we’re hopeful we will be able to set up our own satellite breeding colony in the near future,” she added.

In recent times the species has been accidentally introduced to the Mediterranean Sea, Hawaii and the Gulf of Mexico. Scientists believe tiny microscopic polyps may have been transported in the ballast of ships.

In several areas the white spotted jellyfish is now considered a dangerous, invasive species which is threatening the survival of native species.

Although the species does use stinging tentacles to catch and incapacitate their prey, the sting is not harmful to humans.

It has been estimated that an adult white-spotted jellyfish can filter as much as 50,000 litres of seawater per day.

Jellyfish are highly effective predators and are capable of travelling great distances, despite the fact they have no brains, no bones and are made up of 95 per cent water.

Despite their stinging tentacles some jellyfish act as nurseries for baby fish which use their host’s toxic sting to ward off would-be predators.

There are over 200 known species of jellyfish. They come in a huge variety of shapes and sizes. The largest is called the lion’s mane which has tentacles that can grow over 30 metres in length.