Deadly ‘seaweed’ with fishy sting it the tail 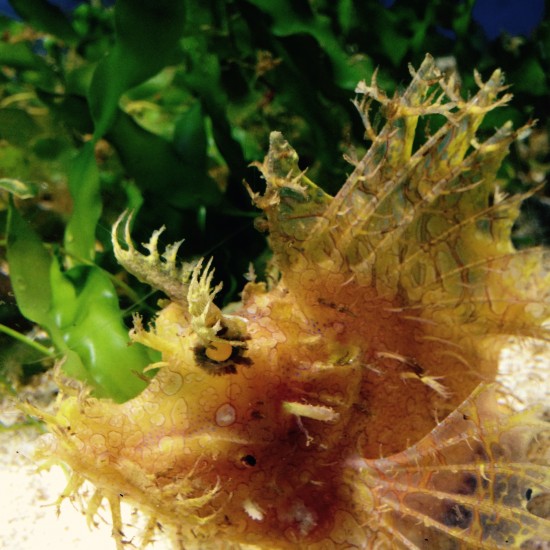 A bizarre-looking venomous fish which disguises itself as seaweed has gone on display for the first time at Bristol Aquarium.

The weedy scorpionfish is covered in seaweed-like appendages and venomous spines.

Found in the Indian and Western Pacific Oceans the scorpionfish is a master of disguise. Perfectly camouflaged against its surrounding the fish is an ambush hunter – lying in wait for potential prey to come in to range.

To add to the illusion they will even sway back and forward to mimic seaweed moving in the current.

Despite their fantastical fins scorpionfish rarely swim, instead they use their fins to ‘walk’ along the seafloor.

Bristol Aquarium’s displays curator, Phil Jane, said: “It’s definitely one of the most unusual species we have had on display here at the aquarium.

“On first sight it does look like a mass of seaweed resting on the sand and it’s only when you take a closer look, or it moves that you realise it’s actually a fish.

“In fact they stay so still, often for days or weeks at a time, they often become covered in algae and have to regularly shed their outer skin.

“Different individuals are able to adapt their camouflage to best suit the marine environment they live in and consequently there is a surprisingly wide range in both colouration and overall body shape.

“In fact they look so different that scientists initially thought they were actually different species,” he added.

Reaching a maximum length of just over 20cms the fish can range in colour from deep red and purple to light blue and even yellow.

Studies have also revealed that specimens which live in an algae-rich environment tend to have more weed-like appendages than those which live on sandy seabeds.