A coral reef is an underwater eco-system that is composed of a large number of corals. Corals are living creatures classed as ‘marine invertebrates’, with each individual coral referred to as a ‘polyp’.
The species of coral that compose coral reefs are known as hermatypic, or ‘hard’ corals, and are found in oceans all over the world. The largest coral reef – the Great Barrier Reef in Australia – is more than 1,500 miles in length, which is longer than the whole of the UK!
If that’s not impressive enough, coral reefs are home to an awesome array of creatures, from sharks to sea sponges.
We’ve listed some of the most interesting creatures you can find coexisting in coral reefs worldwide – all of which you can also find at Bristol Aquarium!

Clownfish and sea anemones have one of the most interesting relationships with the coral reefs they call home. Together, the two creatures have a special partnership, called a symbiotic relationship. 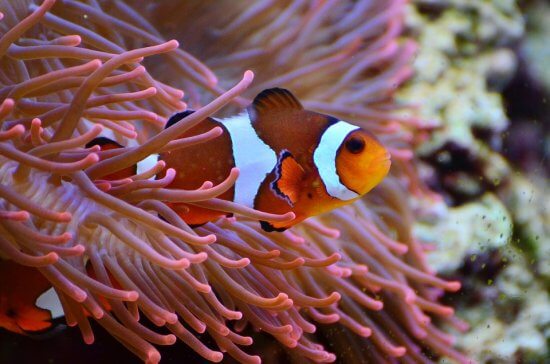 Sea anemones have poisonous barbs in their tentacles that are harmful or deadly to most types of fish and shrimp, which is how they catch their prey.
However, the little clownfish are actually immune to the sea anemones’ barbs, so they can live amongst them to protect themselves from other fish. Clownfish also help out sea anemones by eating invertebrates that would live on the anemones and potentially do them harm. It’s the perfect partnership!

Pufferfish are well known for their amazing defenses against predators. When threatened, they can use their highly elastic stomachs and their ability to ingest huge amounts of water, to puff themselves up and make themselves three times larger than their normal size. Some species even have spines on their skin to make themselves look even less appealing!
Pufferfish mostly eat invertebrates and algae. Large specimens will even crack open and eat clams, mussels, and shellfish with their hard beaks. Some species of pufferfish are considered vulnerable enough to be endangered because of pollution and overfishing.

Did you know: seahorses are one of the worst swimmers in the ocean?! Due to this, they often attach themselves to corals in coral reefs with their prehensile tails (these are tails that can grab things!). They then use their snouts to suck in plankton and small crustaceans that swim by. 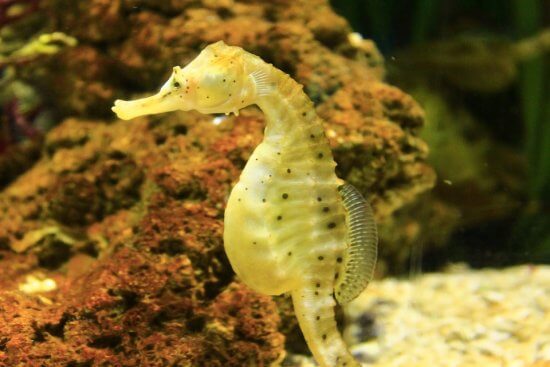 Coral reefs are very important to seahorses, as they protect them from stormy seas. If they were caught up with nowhere to anchor themselves to, the seahorse could die of exhaustion trying to swim through the choppy waters.

The leopard shark is found in warm shallow waters and around coral reefs. They also like to spend their time in muddy bay habitats, feeding on small animals that live in the mud. They are more active at night rather than in the daytime, and can sometimes be seen sleeping on the bottom of the seabed!
Leopard sharks are not endangered at the time being, according to the International Union for Conservation of Nature, as the state of California (where many of the species are found) implemented fishery management regulations in 1992 that reduced harvesting to sustainable levels.

The moray eel is the largest type of eel and can be found in shallow water near coral reefs. They can range in length from 6 inches to a massive 15 feet, depending on the species.
They spend most of their time hidden in covered areas of coral reefs so that they can surprise their prey. They then wrap their body around the prey until it becomes flattened enough to be swallowed!
Our eels at Bristol Aquarium live in a purpose-built display filled with a series of interconnecting holes and passages that mimic the tropical morays’ habitats in coral reefs. Our eel family includes snowflake and zebra eels, which were all donated to the aquarium after outgrowing their original homes.

You can see these fascinating creatures and more at Bristol Aquarium. Our Coral Seas exhibit features over 250 animals, including clownfish, leopard sharks, and eels! This display also hosts daily talks and feeds so that you can learn more about coral species and how they live together in the coral reef!
These amazing underwater communities are breathtaking to look at, however they are suffering the effects of ocean acidification, rising ocean temperatures and pollution. In fact, the number of endangered coral species has risen from two to 22 in the past five years alone. Take a look at our conservation efforts here and see how you can help get involved.
Find out more about our opening times and ticket prices, and don’t forget – book your tickets in advance online to enjoy seasonal savings!