AQUARIUM TO SET ‘IQ TESTS’ FOR QUARTET OF OCTOPUS 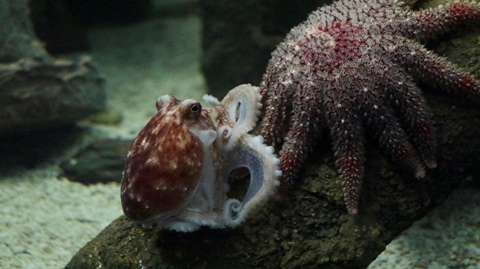 A quartet of curled octopus is to be set a series of challenges as part of a new enrichment programme at Bristol Aquarium.
The newly-arrived cephalopods will share a specially-themed habitat and aquarists are devising a training plan to ensure each octopus is kept both physically and mentally fit.
Found around the UK, curled octopus get their name from their slender, tapering arms which curl at the end.
Bristol Aquarium’s Jake Graham said: “It’s very exciting for us to have several octopus sharing the same display. Many people don’t realise UK waters are actually home to two different species of octopus and this is a great way to showcase the variety of our native marine life.
“In order to keep them mentally stimulated and to ensure they are each getting their fair share at mealtimes we are devising a training plan where each octopus will be assigned their own differently-shaped pot where they will get their food.
“Future training will be by positive reinforcement; with food treats if they react correctly. Having worked with other species we have a relatively good plan in mind, however with any new species there will always be unforeseen challenges!
“The plan now is for us to really get to know each of the octopus and understand their different personalities,” he added.
:: VOTE FOR OCTOPUS NAME! ::
The aquarists have also decided to name each of the octopus to emphasise their individuality. The team have opted for the names of Scottish islands which is the type of environment where they are commonly found.
“The largest one is called Harris, the smallest one is Eigg, pronounced ‘egg’, and the third one we are naming Skye,” said Jake.
“We wanted to get the public involved in the process and so have decided to leave the choice of the last octopus’ name up to an online vote on our Facebook page.
“To stick with the theme we have come up with a shortlist of five Scottish islands and are inviting people to vote for their favourite. The five we have chosen are: Islay, Iona, Rona, Muckle Roe and Fara,” he added.
Curled, or lesser, octopus reach a maximum of about half-a-metre in length. In recent years their numbers have increased significantly in the North Sea and they are commonly found within fishermen’s pots hunting for crabs and lobsters.
Although they are usually reddish brown in colour they can change shades quickly and discharge ‘ink’ when threatened. They spend much of their time lying low in holes and crevices or among rocks.
Despite the fact that they belong to the same family as slugs and snails, octopus can perform highly complex tasks. As well as unscrewing jars, they can open boxes, distinguish between different shapes and complete mazes.
Issued by Bristol Aquarium. For more information please contact Sarah Moore or Jake Graham on 0117 929 8929.
Photo: Jake Graham