ELECTRIC EEL PROVES TO BE A REAL LIVE WIRE 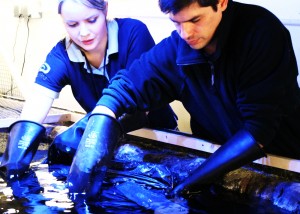 Aquarists at Bristol Aquarium were forced to don rubber gauntlets as they carefully welcomed their newest arrival – a metre-long electric eel.

The extra precautions were necessary as the South American eel is capable of delivering a 600 volt shock – almost three times the power of a UK wall socket.

The eel, who has been nicknamed Bolt, could potentially double in size and weigh up to 20kgs when fully grown.

Bristol Aquarium’s David Waines said: “Bolt is very lively and our aquarists had to take all precautions to ensure they weren’t harmed while he was being transferred into his new display.

“In addition to rubber gloves and rubber-soled shoes, he was also placed inside a large plastic bag for the move which thankfully went smoothly.

“He’s also incredibly agile and can even swim backwards which potentially makes him an extremely slippery customer,” he added.

The freshwater predators have around 200,000 specialised cells – known as electrocytes – which can store electricity like tiny batteries.

They use their extraordinary electrical abilities both to stun prey and to protect themselves from attack in the murky waters of the Amazon and Orinoco basins in South America.

As well as fish, the eels also feed on birds and small mammals and have to come to the surface regularly to breathe.

The eels have very poor eyesight and instead rely on a low level electrical force which they use like a radar to navigate and track their prey.

Despite its name the electric eel is actually thought to be more closely related to freshwater carp and catfish.

The shock from an electric eel has been known to knock a horse off its feet and although human fatalities are incredibly rare, it is thought that multiple shocks could induce respiratory or heart failure.

In a Japanese aquarium the eel’s electrical discharge was even harnessed to light up a Christmas tree.

“Thankfully we have our own back-up generator on site so we won’t have to be relying on Bolt to keep the lights on in case of a power cut,” added David.